Those of us who got our neuroscience education recently are raised from our undergraduate days to think that electric currents across the membrane are generated from ion flow through pores in channels. While true, it is easy to lose appreciation for the fact that this was hard-fought knowledge and things could have turned out quite differently. There are multiple lines of converging evidence for a pore which I'll review now.

TEA studies (Armstrong)
When TEA (a K-channel antagonist) is introduced intracellularly, it can be dislodged when the cell is hyperpolarized below Ek so K+ flows in. The fact that K+ can flow into, but not out of, TEA-blocked cells, suggests that TEA sticks in a cavity on the intracellular side, but can be dislodged by inflow of K+. [Ch 16]

Armstrong, based on further studies with TEA, also calculated that 600 K+ ions/ms flow out of a channel. Physically speaking, this seems too high for a carrier, too high for most enzymes, but well within possibilities for a pore. [Ch 11]

Ion selectivity of channels
Channels are permeable to ions only up to a certain size [Ch 14]. "Such size selection suggested a pore acting as an atomic mechanical sieve" (p. 72).

Pre-crystal structural evidence
Based on sequence information, which can be used to generate hydropathy plots (plots which show stretches of hydrophobic/hydrophilic protein) are used to infer the tertiary structure of channels in vivo. All voltage-gated channels consist of four domains (each containing six transmembrane spanning segments) that are either covalently linked (Na, Ca) or form by oligomerization of such subunits (K channels). This sequence information also allows us to study the effects of mutation on channel function (e.g., effects on ion flow, toxin-receptor interaction, and gating currents). Such molecular models suggest that each domain has a length of molecules that faces an internal pore. An excellent overview is provided in the following figure and text are from Catterall's group: 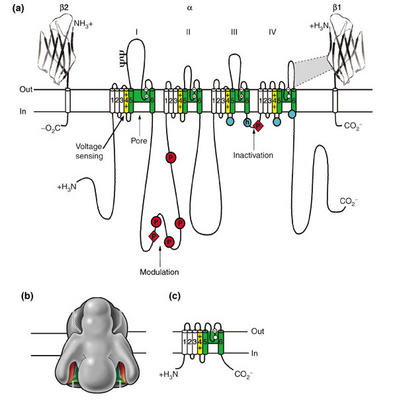 "Sodium-channel proteins in the mammalian brain are composed of a complex of a 260 kDa α subunit in association with one or more auxiliary β subunits (β1, β2 and/or β3) of 33-36 kDa [3] ([See accompanying figure: click on it for a larger version]). Nine α subunits (Nav1.1-Nav1.9) have been functionally characterized, and a tenth related isoform (Nax) may also function as a Na+ channel. The primary sequence predicts that the sodium channel α subunit folds into four domains (I-IV), which are similar to one another and contain six α-helical transmembrane segments (S1-S6). In each of the domains, the voltage sensor is located in the S4 segments, which contain positively charged amino-acid residues in every third position. A re-entrant loop between helices S5 and S6 is embedded into the transmembrane region of the channel to form the narrow, ion-selective filter at the extracellular end of the pore. The wider intracellular end of the pore is formed by the four S6 segments. Small extracellular loops connect the transmembrane segments, with the largest ones connecting the S5 or S6 segments to the membrane re-entrant loop. Larger intracellular loops link the four homologous domains. Large amino-terminal and carboxy-terminal tail domains also contribute to the internal face of the sodium channel. This view of sodium channel architecture has been largely confirmed by biochemical, electrophysiological, and structural experiments."

Crytallography
In the above paper, Catterall goes on to state that "A complete three-dimensional structure of the sodium channel is not yet available." The same is not true of the voltage-gated K channel. KcsA, a K channel found in the bacterium Streptomyces livedans has been successfully crystallized and visualized (Plates 2c and 2d). As expected, the channel shows a narrow pore through which K+ ions can flow.

Patch clamp
Hille's description of this seminal work introduced by Neher and Sakmann in 1976 is excellent, so I won't use much bandwidth summarizing it here. Essentially, they learned how to form high resistance seals with small areas of the cell membrane, even to the point where we can measure currents generated by single channels. The ability to record the activity of single proteins in vivo is extremely rare in biology. See figures 3.16 and 3.17 for traces of currents through Na- and K- channels. These studies have shown that the opening/closing of channels is extremly rapid, operating on time scales smaller than the microsecond. Also, it has been possible to calculate that individual ions traverse the length of the channel very quickly, on the order of nanoseconds. This fact alone makes all but the pore hypothesis untenable.
Posted by Eric Thomson at 10/13/2005 02:30:00 PM 5 comments: