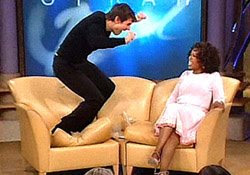 Cruising the web, I ran into the official Application for Enrollment in Scientology Religious Services. Surprisingly, it reads much more like a legal contract than a standard application. I found the paragraph that discusses psychiatry quite interesting. It certainly helps explain some of Tom Cruise's behavior. Below is the full paragraph, with comments on the main points.

Scientology is unalterably opposed, as a matter of religious belief, to the practice of psychiatry, and espouses as a religious belief that the study of the mind and the healing of mentally caused ills should not be alienated from religion or condoned in nonreligious fields. I am in full agreement with this religious belief. [italics added]

Here they stake an interesting claim. Basically they are like Christian Scientists who restrict their refusal of medical help to one specialty. I can't say I'm completely unsympathetic: because of its subject matter, psychiatry is not nearly as well-developed or objective as other branches of medicine. That doesn't mean psychiatry doesn't help a lot of people (it does) or that it is pseudoscience (it isn't always).

They go much further than this, though. They add that any study of the mind, with "mentally caused" ills as a special case, should only be performed within a religious context. Any purely secular study of the mind is permanently opposed by Scientology.

Even the most kooky right-wing Creationist hacks wouldn't go this far. It would imply that psychology (other than behaviorism) is a taboo science. Psychophysics, cognitive tests on Alzheimer's patients, and the study of the visual capacities of people with different types of brain damage all seem fairly vanilla secular studies of the mind. So, the Scientologists really should clarify the subset of questions that can appropriately be targeted in a secular context.

This connects with another interesting issue. While they will not defer to psychiatrists in the case of "mentally caused" ills, what about physically caused mental ills? E.g., if I lose a chunk of my cortex in an accident, that will certainly cause some mental ills. I'll need to see a neurologist, if not a psychiatrist. Also, what is not mentally caused in their framework? Is sleepiness mentally caused? What about cancer? Given the emphasis on personal power and responsibility in their philosophy, we need to ask.

I do not believe in or subscribe to psychiatric labels for individuals. It is my strongly held religious belief that all mental problems are spiritual in nature and that there is no such thing as a mentally incompetent person--only those suffering from spiritual upset of one kind or another dramatized by an individual. I reject all psychiatric labels and intend for this Contract to clearly memorialize my desire to be helped exclusively through religious, spiritual means and not through any form of psychiatric treatment, specifically including involuntary commitment based on so-called lack of competence.

The above reads almost word-for-word like the beliefs of Christian Scientists, who believe that all "illness" is really an invasion by evil spirits, not something that can be cured by medicine.

Why this animosity toward psychiatry? This could be an attempt (not necessarily conscious) to kill a direct competitor to their method: traditional methods of therapy within a secular context. This may sound crazy, but consider that L Ron Hubbard's first Scientology text, Dianetics, is subtitled 'The Modern Science of Mental Health.' It was published in 1950, when psychiatry was a fairly young science. The theory of the mind (and mental problems) advanced by Dianetics reads like warmed over psychoanalytic theory. The subject is directed to bring to consciousness certain buried memories ('engrams') that contribute to your 'reactive mind' that, unbeknownst to you, controls your behavior and emotions in the present. This is done via a process of talking to an 'auditor'. If interested, see the page How the mind works at the Scientology web site. This sounds a lot like early clinical psychiatry.

Since Dianetics is basically a reheated model of the mind, with its own set of exotic categories ('Clear' when your 'engrams' are properly 'audited'), this psychiatry hate is sort of amusing. The Scientologists clearly consider Dianetics a science, and science is self-conscious about its fallibility, open-ended nature, and openness to new information and data. Scientology, or at least this document, aspires to none of these scientific ideals.

There are, of course, interesting issues in the underbrush when the say they reject psychiatric categories. If you read the source of the categories, the Diagnostic and Statistical Manual of Mental Disorders (DSM), it isn't a perfect document. Some of the categories seem ill-defined or subjective, and there is a good deal of overlap among symptoms that makes it hard to come up with definitive labels. Historically it has included some silly cultural prejudices (like homosexuality) in its list of disorders. It still includes 'female hypoactive sexual desire disorder', which is controversial (see link above for other controversies).

All told, I rather like the DSM because it is self-consciously fallible, open-ended, and evolving. It reflects the tentative classifications formed by those working with patients, doctors that have noticed many different suits of symptoms tend to cluster together. If nothing else, it provides a consistent language for practitioners to use to talk with each other. While you could describe a long list of symptoms to a colleague ("Subject experiences auditory hallucinations, nervous and paranoid, prone to violent outbursts"), it is easier to say '"paranoid schizophrenic".

Under no circumstances, at any time, do I wish to be denied my right to care from members of my religion to the exclusion of psychiatric care or psychiatric directed care, regardless of what any psychiatrist, medical person, designated member of the state or family member may assert supposedly on my behalf. If circumstances should ever arise in which government, medical, or psychiatric officials or personnel or family members or friends attempt to compel or coerce or commit me for psychiatric evaluation, treatment or hospitalization, I fully desire and fully expect that the Church or Scientologists will intercede on my behalf to oppose such efforts and/or extricate me from that predicament so my spiritual needs may be addressed in accordance with the tenets of the Scientology religion free from psychiatric intervention.

This is also an interesting paragraph. I sympathize with its likely motivation: they don't want Scientologists to be forced to receive psychiatric treatment against their will. I'm sure this is a serious concern partly because of their oddball beliefs, such as their putative beliefs about Xenu the alien dictator.

On the other hand, to sign a contract in which you agree to never see a psychiatrist regardless of the situation seems reckless and dangerous. Instances of postpartum depression, with clear physiological causes and treatments, don't respond particularly well to psychotherapy, and do respond well to antidepressant drugs. It seems silly to apply a screwdriver to a nail, and the Scientologists are saying there is only one tool you need to cure all ills with any mental dimension.

The clause that you want Scientology to intercede and oppose any attempts to provide you with psychiatric care is particularly worrisome. Does this mean Scientologists should actively try to prevent someone from seeking such care, even if they want it? Probably not. However, one practical consequence is that the social pressure to avoid psychiatry is very strong within their subculture. This will lead to many people not receiving adequate care for easily treatable conditions.

These are not idle worries. We have the tragic case of Linda McPherson, who died after her tortured 'Introspection Rundown' with the Scientologists. She was likely psychotic, but they refused to send her to a hospital, even after a Scientologist doctor told them they should send her, for fear that she would be taken to see psychiatrists.
Posted by Eric Thomson at 8/12/2008 02:01:00 PM No comments: