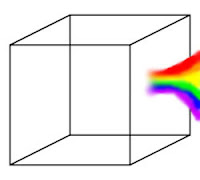 To prepare the next installment in my series on consciousness research, I've been studying the Necker Cube. Little did I know that the cube was actually a prism that displays the main threads of perception research since 1833. An entire book could easily be written about this simple little line drawing. Despite all the research, there are still basic questions about the cube that haven't been addressed experimentally. I'll post what I've learned in the next couple of weeks.
Posted by Eric Thomson at 8/28/2009 03:22:00 PM 1 comment:

This post will be a permanent placeholder for links to all of my consciousness posts. It will expand until I finish posting on the topic.

(2) Introducing Mr B: A look at the methods of your garden-variety biologist, and what distinguishes a biological approach from other perspectives (like that of the physicist).

(3) Mr B's first take on consciousness: In his first look at the evidence, Mr B concludes that neuronal processes are necessary and sufficient for consciousness in humans.

(4) Leveling with Mr B: We examine the different spatial and temporal levels of organization in the nervous system, and pinpoint the levels most relevant for consciousness.

(5) Switching Voices: Discusses the reasons I will begin referring to Mr B in the first person.

(9) From texts to the grotesque cinema: to help make precise the claim that perception is stimulus interpretation, we examine the question, 'What is a stimulus?' in some detail.

(10) Contents and Vehicles: starts exploring the analogies between linguistic interpretation and visual perception. First up: there is a content/vehicle distinction.

(12) What the brain thinks it knows: continuing the previous two posts. I examine the effects of background knowledge and assumptions in perception and language interpretation.

(13) The interpreter versus the scribe: summary of the view that perception is stimulus interpretation.

An intermezzo in my series of consciousness posts. It's been a while since I posted, so I needed to oil the chain.

In conversations about consciousness, the voice of the garden-variety biologist (Mr B) often gets drowned out. This is typically due to blithely confident philosopher-types who act as if the armchair provides just as much authority as the lab bench when it comes to consciousness. Equally perplexing is that some folk's confidence actually becomes bolstered by the paucity of theoretically significant experimental results about consciousness. A lack of data makes good scientists less confident, not more confident, about a topic. (There are interesting parallels with creationism here.)

I am happy to start by inverting this antiscientific bias about consciousness. In that spirit, I will grant Mr B sole control of the lectern until he has finished saying what he has to say. Only then will I entertain questions from those armchair pilots who believe they have deadly objections to Mr B's project. At that point we will be better posed to see if they are right.

While I am not Mr B, for the above reasons I do consider myself his advocate. Because it is becoming a distraction to talk about him in the third-person, I will simply speak in his voice for a bit. Because confusion is likely to follow such a grammatical shift, this post will serve as a handy reference (especially for those tempted to bemoan my ignorance of what the philosophers have (putatively) contributed to our understanding of consciousness).