A big day for systems neuroscience in Nature yesterday: three papers! Each paper investigates a different question about synaptic organization in the cortex. Not one paper created a new word ending in '-omics,' an auspicious sign.

I superficially describe the main results from each paper below, with some figures.

First, Brown and Hestrin bring us Intracortical circuits of pyramidal neurons reflect their long-range axonal targets. After fluorescent labeling of corticocortical (CC), corticostriatal (CS), and corticotectal (CT) pyramidal cells in cortex, they sliced the mouse brain and patched onto as many as four of the cells in layer five of V1 to measure the probability of cells synapsing onto cells of the same type (and later in the paper, different types).

They found distinct patterns of connectivity for the different cell types (see Figure). For instance, while 20 percent of the CS cells were connected monosynaptically, CT pyramidal cells only hooked up with one another about five percent of the time. They further showed this wasn't merely because some cells are more promiscuous than others (though they didn't show this for CS neurons).

Next up was a paper from Murayama and others in Larkum's group titled Dendritic encoding of sensory stimuli controlled by deep cortical interneurons. They loaded layer V cells in rat somatosensory cortex with calcium indicator, and then imaged layer 1-3 calcium activity during hindlimb stimulation. The supragranular signals represent activity solely in the apical dendrites from the loaded Layer 5 pyramidal cells. Via various pharmacological manipulations (often involve injecting more boluses into layer V), as well as in-vitro patch clamps, they support the claim that a particular type of inhibitory interneuron in layer V suppresses dendritic calcium levels. Then, using triple patch clamp (two neighboring layer V pyramidal cells, and one of their dendrites), they showed that stimulating one of the cells produced dendritic inhibition in the other cell via a disynaptic connection.

Of the three papers, this would be the best one to present in a journal club because it is fairly complicated and hard to understand on a quick once-through. A journal club audience would appreciate you doing the work for them. Frankly, I still haven't thought through the logic of all their experimental manipulations.

Third, from Petreanu and others in Svoboda's group is The subcellular organization of neocortical excitatory connections. It was only a matter of time before the channel rhodopsins spawned acronyms. In this quite elegant paper they described their application of sCRACM [subcellular ChR2-assisted circuit mapping] to determine the spatial organization of axodendritic synapses onto neurons in somatosensory cortex of mice. They did this in slices in which particular areas expressed channel rhodopsin ChR2. For instance, they expressed ChR2 in the VPM nucleus of the thalamus, which carries information to the whisker barrels in S1. Then they could stimulate the axons of the VPM neurons with a laser to find its postsynaptic targets.

They patched onto a cell in S1, and would then laser-stimulate the channelrhodopsin-expressing axons in the vicinity of the patched neuron. When the HH channels were blocked, a laser pulse on a ChR2-expressing axon would still generate PSPs in the postsynaptic cell. The spatial resolution of the mapping was approximately 60 um2, so they were able to map the distribution of synapses with decent precision. The figure accompanying this paragraph is an activation map of a layer 5B pyramidal cell in which the ChRs were expressed in the VPM nucleus of the thalamus. Most of the VPM->S1 synapses occur in Layers IV and VB, though there is some activity in supragranular layers.

The second and third papers use very cool methods to achieve fairly unsurprising results. The first paper used more common methods, but the results were a bit more interesting (i.e., less predictable). All in all, a good week for synapses.
Posted by Eric Thomson at 2/25/2009 05:46:00 PM 4 comments:

Why not read something cool about evolutionary biology in honor of one of our greatest naturalists?

Some good online reading:
*Darwin: an online exhibit from the American Museum of Natural History.
*15 Evolution Gems: beautiful piece put together by Nature discussing 15 papers published in their journals that provide striking examples of evolutionary thinking. Unfortunately no figures.
*Evolution 101: A nice introductory course put together at Berkeley.

Good books:
*Frogs, flies, and dandelions: a book that focuses on what we know, and don't know, about speciation.
*How and why species multiply: a great book on speciation using Darwin's finches as a case study. Written by two monsters in the field.
*Evolution of Nervous Systems: an amazing four-volume set edited by Kaas. Too expensive to buy, but you should be able to find chapters online through your library. Check this link to see if you have access from your IP address.
*Endless forms most beautiful: a wonderful introduction to the hot new science of evo-devo (evolutionary developmental biology). 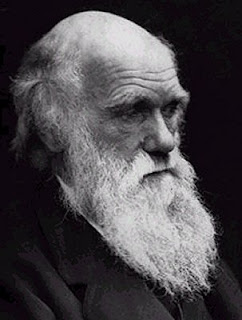