Lots of great systems neuroscience this month. It was hard to narrow it down, but three papers really stood out.


Eichenbaum -- The role of the hippocampus in navigation is memory. J. Neurophys.. [Pubmed] Most of us have wondered about the relationship between the two main views of the hippocampus: on one hand, the hippocampus is key for long-term memory formation, and on the other hand we have the view from the place field, where the hippocampus contains a map that is used for navigation. In this wide-ranging review article, Eichenbaum forcefully argues that the hippocampus is not specialized for spatial navigation per se, but for the construction of memories of relatively highly organized complex information in space and time (i.e., episodic memories). He argues that context-dependent spatial features are just one of many complex relational features to which the hippocampus is sensitive as it serves its role in memory function.
This review article is notable partly because it is a rich source of references that outsiders probably don't know about. For instance, if you are really familiar with an environment, you can still navigate it even with hippocampal lesions (https://www.ncbi.nlm.nih.gov/pubmed/15723062). Also, an imaging study in humans suggests there may be a grid-like parcellation of abstract conceptual spaces, not just geometric space (https://www.ncbi.nlm.nih.gov/pubmed/27313047). Note I can't endorse all these studies, as I have yet to read or evaluate them; but it is useful to have all this intriguing stuff in one place as food for thought. 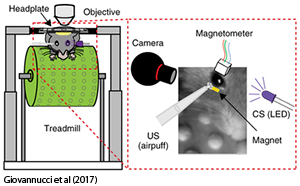 Giovannucci et al -- Cerebellar granule cells acquire a widespread predictive feedback signal during motor learning. Nat. Neurosci.. [Pubmed] Using calcium imaging, they recorded from populations of granule cells, the input cells of the cerebellum, during eyeblink conditioning (recall in eyeblink conditioning you associate a cue, such as a light, with an air puff to the eye, and eventually that cue will evoke a blink). As animals acquired the behavioral response to the new cue, this was reflected in the emergence of signals within the granule cells that predicted oncoming eyeblinks.
What is really amazing in this study is that they recorded from populations of some of the smallest cells in the brain for multiple days in a row, in awake animals. I'm not surprised that the cerebellum acquired eyeblink-related control signals during training; what is most impressive to me is the raw experimental expertise involved here, and the potential this model system has for helping us dissect forward model theories of motor control.

Shadmehr -- Distinct neural circuits for control of movement vs. holding still. J. Neurophys.. [Pubmed] A fun review article by Shadmehr that focuses on the eye movement system. There are different mechanisms at play for movement versus holding still, even though from the perspective of the muscles in your eyes, holding still is "just as much an active process as movement" (Shadmehr, quoting Robinson, 1970). Could this be a general principle? After reviewing the evidence from the eye-movement system in some detail, Shadmehr discusses whether the same principles might hold for neuronal control of head movement, arm movement, and navigation.
This intriguing possibility could help shed light on apparent discrepancies between pre-movement preparatory activity observed in M1 (when animals are still) and activity observed during movement. This topic has received a lot of attention lately from Mark Churchland's lab (see [1], [2]).
Posted by Eric Thomson at 5/05/2017 09:59:00 PM No comments: