Developing Intelligence provided a helpful summary of a fun and thought provoking paper by Douglas and Martin that addresses the question, "What is the basic cortical computation?" with special emphasis on the traditional answer: whatever it is that a column does.

The paper points out that the traditional functional columns (as seen in rat whisker barrels and ocular dominance columns in V1) don't align neatly with minicolumns, which are often taken to be the fundamental computational unit (minicolumns are 'vertical cylinders' of cells about about 50 microns in width (the above image is an example from this review)). Columns, on the other hand, are about 500 microns in diameter and the cells within a column are typically taken to have similar functional properties (e.g., similar receptive fields).

Douglas and Martin say, regarding this mismatch between minicolumns and columns, 'This means that even in a highly specialized “column” such as those evident in the rodent barrel cortex, one cannot simply clip out a cylinder of tissue that contains the whole local circuit, for later reconstruction “in silico”'. They may be overstating things a bit: while the minicolumn and the column don't align neatly, that doesn't mean the columns aren't the fundamental unit of computation. So, the fundamental unit isn't the minicolumn, it's a whole bunch of minicolumns organized into a column via horizontal connections. What's the problem?

On the other hand (and Douglas and Martin might agree) even larger-scale structures like barrels are suspect as the basic computational units. When you stimulate an individual whisker in awake rats, often ten or more whisker barrels are activated, on average more than five (review here). A recent study by Ferezou et al. showed that when a single mouse whisker is stimulated in awake mice, about ten milliseconds after the initial localized response most of the barrel cortex is activated, and this activity sweeps even to motor cortex (image to left is taken from Figure 3 of this paper). While it would certainly be inconvenient if cortical representations, even of simple spatially punctate stimuli, were much more distributed than previously thought, it is starting to look like an inconvenient truth.

I don't want to overstate these results. After all, the initial response is fairly localized in that study! However, the above results are at least consistent with the claim that the simplest anatomical (i.e., columns) and functional (i.e., receptive fields determined in anesthetized animals) maps may not generate an accurate functional decomposition of the cortex in all its complicated glory.

To make matters worse, some think that we shouldn't even talk about the basic functional decomposition of the cortex, but given the tight feedback between cortical and thalamic systems, we should think more about the fundamental computations being carried out by thalamocortical loops (for example, see this review).

These speculations about thalamocortical loops mostly apply to the "back" of the brain. In the frontal lobe, we have to consider the importance of the role of the basal ganglia, which then speaks back to the cortex via the thalamus (for example see this review). For all we know, we may end up having to describe two functional basis sets, the thalamocortical computational units and the striato-thalmo-cortical units. One loop geared toward processing things sensory, the other geared toward processing things motor. Wouldn't that be convenient.
Posted by Eric Thomson at 12/18/2007 11:47:00 PM 2 comments:

Review of Seung's talk at SFN 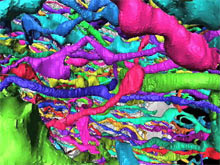 It's been a few weeks since SFN. It was exceptionally well organized, San Diego was beautiful, and the scientific content overwhelming as always. Sebastian Seung's entertaining Presidential Lecture, The Once and Future Science of Neural Networks, generated more chatter and emotion than any I've seen at SFN.

There were two main neuroscience topics in Seung's talk, the hedonistic synapse and connectomics. I'll briefly review each topic, and then discuss why the talk generated so much discussion.

The hedonistic synapse
The hedonistic synapse (review article in Neuron here) refers to a hypothetical learning rule in which synaptic weights are adjusted in proportion to a global reward signal broadcast through the CNS. For example, if a presynaptic spike is followed immediately by a postsynaptic spike, that synapse will be strenghtened if dopamine is present. If the same series of spikes occurs without dopamine, there is no change in the weights. Technically, the weight change is a product of the global reward signal and an 'eligibility trace' which describes the relevant relations among spikes in the pre- and postsynaptic neurons.

Seung's group has shown that a network of neurons using the hedonistic rule will tend to maximize reward in the system. So, hedonistic synapses can in theory maximize animal reward.

Seung then discussed the model in the context of birdsong learning, hypothesizing that when a fledgling's birdsong closely matches the stored template, a reward signal is broadcast to the appropriate nucleus, inducing hedonistic synaptic changes that will eventually push the actual song into alignment with the template. For that work, see this paper.

I am interested to see what happens when experimentalists vary reward signals while performing the typical experiments to evoke synaptic weight change. Will the rules change depending on reward? That would be very cool.

I haven't studied Seung's model in enough detail to understand how it relates to the well-known experimental demonstrations of spike-timing dependent plasticity (STDP: for a review, see this paper). STDP studies show that the sign of a synaptic weight change depends on the relative timing of spikes in pre- and post-synaptic neurons. Many of these experiments were done in slice or culture, and to my knowledge did not modulate dopamine or other putative reward signals in the preparation.

Connectomics
Connectomics is the study of the distribution and abundance of synaptic connections among neurons in the brain, a kind of synaptic ecology. Seung described an exciting collaboration with Winfried Denk, in which they are reconstructing, at nanometer scales, the structure of relatively large chunks of neural tissue (for a review, see this paper). The technique is known as serial block-face scanning electron microscopy (SBFSEM). SBFSEM will yield not only the wonderful dendritic and axonal morphology in the tissue, but will provide a full description of the distribution of synaptic connections as well.

You can view a beautiful movie that shows an example of such a reconstruction carried out in the retina (inner plexiform layer) of the rabbit. This movie received spontaneous applause from much of the audience.

Of course, simply having a circuit diagram of a chunk of tissue is not sufficient to reconstruct its functional architecture. The anatomy doesn't tell you the biophysical properties of the individual neurons and synapses, and network properties can be dramatically influenced by the neuromodulatory mileau in which the circuits are bathed. However, ultimately we want to wed the detailed anatomical and functional stories, and this work is a promising step in that direction.

Incidentally, 'connectomics' is a cheesy mouthful of a word. Some words just weren't meant to be biologized with the -omics suffix, and 'connect' is one of them. 'Genomics,' cool. 'Proteomics,' a little annoying and not very creative. 'Connectomics,' stop the bus I want to get off. At the very least let's reserve the -omics for molecular biology. Thank goodness Bialek didn't try to pull us into the world of 'infomics.'

The hubub
The scientific content of Seung's talk was cool. You'd think the reactions would be mostly positive. What generated the meta-talk was the style of his presentation. It was peppered with dramatic pauses (e.g., the above movie was prefaced with, "Ladies and gentleman, I present...the retina."), lots of jokes, and big-picture musings on neuroscience.

Many people sitting near us at the talk were scowling much of the time; some said his theatrics were out of proportion to any truly novel scientific content. It wasn't like he was presenting something on a par with General Relativity.

In contrast, my reaction was quite positive (and I think the split is about 50/50 on this: very few were neutral). I found it to be a fun, informative, and inspiring talk. At the end of a long day of staring at posters and concentrating on technical talks, to have a seasoned theoretician from physics (the Bell Labs cult no less) give a conversational, approachable, big-picture perspective on the field of systems neuroscience was refreshing and quite entertaining. I found his excitement infectious and wanted to go and start doing experiments right when the talk ended. Sure, it required that I tone down my usual enraged skeptic demeanor (as a good sport will do in a horror movie), but at the end of a day at SFN, I had no trouble with this.
Posted by Eric Thomson at 11/27/2007 07:33:00 PM 3 comments:

Back in the swing

Grants are done, things are manageable so I'm firing this thing up again. I notice there are lots of new neuro-themed blogs out there so I'll have to update my sidebar over the next couple of weeks.

As for the blog, my initial experiment gave a negative result: a blog isn't a good place to simply provide dry and detailed summaries of a technical work such as Hille's. My plan with that is to finish the summaries through Chapter 3 (which means, finish the Boltzmann Distribution stuff), and then compile it into a kind of 'User's Guide to Hille.'

This will become a more traditional science blog, with random musings and discussion of what is going on in the world of neuroscience. My first post will be about Sebastiun Seung's much discussed talk at SFN this year.
Posted by Eric Thomson at 11/15/2007 03:40:00 PM No comments: